THE TAUSUGS ARE known warriors. Never an honest writer skips to mention the bravery of the Tausugs as fighting men. Filipino and American colonizers even use the word juramentado to refer to the Tausug Gagandilan. Juramentado, derived from the Spanish word juramentar, means one who takes an oath to die while fighting. The word is often interchanged with amok, taken from the Malay word amuk or mengamuk, which means to run out of control. In Bahasa Sug, to run amok means magwala’. 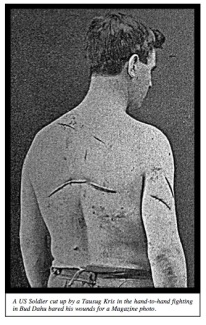 Juramentado, in the Tausug sense however, is an act of martyrdom or pagparrangsabil. Anyone who becomes a juramentado and gets martyred is known to be parrangsabil. All magsasabil or parrangsabil entrust their fates to Allah, strengthened by yakin or their confidence that no humanistic agent could harm or kill them. Whatever happens to them is from the “will of Allah.”

Before setting out to fulfill the parrangsabil, Tausugs ask the blessings of their gurus, Tuan Sharif or Tuan Imam. They even sometimes visit the tombs of dead gurus to seek barakat or blessings.

Tuan Sharifs or Tuan Imams are the religious gurus who give Tausugs permission to fight through the will of Allah and Qudratullah. These gurus are known to the Spaniards as Pandita. Throughout the history of parrangsabil in the Sulu Archipelago, Spaniards were known to have destroyed and burned tombs of many sharifs and imams to prevent Tausugs from visiting them. Tausugs are known to usually prefer death over putting their maruah or dignity at stake.

The main fighting weapons of the Tausug warriors are the Kalis (Kris), Barung (Bold knife) and Budjak (Spear).

During periods of foreign colonization, the parrangsabil would be seen running with their kalis on the streets of Jolo, Zamboanga, Siasi, Bungau, Mapun, Basilan, Palawan and Lupa’ Higad, killing as many Spanish and American soldiers as they could.

Tausugs are fond of conversing during coffee breaks about the Tausug Invulnerability. There is rarely a conversation that does not mention this topic. The Tausug’s belief in their invulnerability is taken from their belief of Allah’s will. To them, it is only Allah that can protect them from harm.

For the Tausugs, invulnerability is called di’ pag-ukun which means “cannot be pierced”. The impenetrable man, or man that cannot be pierced, is known as tau di pag-ukun or bunut basa’. Bunut basa’ is a Tausug slang which literally means “wet coconut husk”. The impenetrable man is also boldly known as kubulan, which means invulnerable to any sharp or metal objects, equivalent to the Malay word kebal. Modern era enemies in fights against Tausugs see kubulans as Robocop, a superhuman cyborg cop from a 1987 American movie.

In formal terms, someone invulnerable is called marayaw timbakun. That means someone who is “good to be shot” because of his invulnerability to bullets. To Tausugs, everything depends only on Allah’s will, nothing more and nothing else.

According to Tausug author and researcher Tuan Sharif Aliazer, a person who is invulnerable to any sharp objects posses several key attributes: wayi lummi’ ha pangatayan (no dirt in the heart), baying ulungun (caring), and baying kasihun (loving). Other attributes are based on knowledge or ilmu’. The person or man who is knowledgeable shall have his yakin to the ilmu’ and is thus invulnerable. 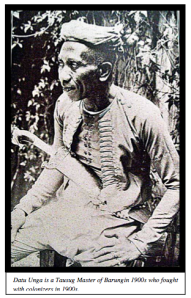 Tuan Sharif Malik Sheikh Ali said that one of the basic beliefs to strengthen the yakin of a person for him not to be pierced by any sharp objects is the kasussihan (purity). Nur Muhammad is also said to be invulnerable. It is from Nur Muhammad, he said, that humankind was created. Invulnerability results from having no doubts about the Qudratulllah (the power of Allah).

Tuan Sharif Malik Sheikh Ali added that it is not about the skin or flesh being invulnerable to bullets or any sharp objects, but about the ilmu’–the body’s familiarity with objects that touch it. It’s as if the objects themselves and the human flesh are friends, thus knowing each other’s selves.

Common practice among Tausugs is the belief in alamat. The alamat is an internal compass used to determine if a day is safe or not. This is part of the Tausug’s secrets on how to be safe from harm and injury. Through the alamat, Tausugs can determine the best time to attack the enemy as well as where best to shoot them.

One of the applications of alamat is pagtitik. The pagtitik is the practice of counting the letters in peoples’ names. In pagtitik, every letter is assigned a number. The numbers are used to read a person’s fate. The pagtitik is part of the putikaan or kutikaan. It is a way to look at the fortune for the day or the next and coming days and time.  Some Tausugs also practice pitunang, or the act of reading chants on a bullet.

The Tausugs who apply the knowledge to be invulnerable are not afraid to die. They practice what is allowed in Islam as protection from danger, harm and injury. This is so people in a defensive war can continue to fight for longer time through the Will of Allah.

There are many ways in which a Tausug is believed to be invulnerable to sharp objects or to bullets. One way is when a bullet reaches a person’s body but will only slide through as the skin or the flesh is impenetrable by it. Another is when the bullet is fired but won’t reach the target. It will instead melt as water or explode into pieces midair. The Tausug, before going to war, does the mag-alamat, umalamat or target. And the guns will themselves be blasted upon firing.

Invulnerability varies based on the practices and rituals Tausug men and women use to achieve them. The rituals are also varied according to the different pangadji or teachings of gurus.

There are amulets that derive their charm from Quranic verses and vernacular words. Pis Siyulatan is also a form of amulet. It is a piece of cloth with Quranic verses written on it. The cloth is of different colours; the most common is green, white and yellow.

Kabatinan: Kabatinan is the belief in the unknown that exists. One who believes in batin believes in having a direct link with Allah. In kabatinan, Quranic verses are applied into water, which is then drunk by the Tausug or used in bathing. This is also the application of the concept of kasussihan (purity). 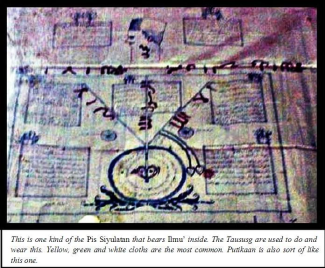 The pag-alamat or alamat is part of the kabatinan. Sometimes people understand this as sihir. Sihir is actually another practice, and it is also believed to be from Allah.  In Sihir a person derives his power from chanting to ask help from Allah to make someone invulnerable to any sharp objects; this kind refers to the Will of Allah. To the Tausug, there is nothing in this world that passes without the will of Allah.

There are many more details on the Tausug Invulnerability which are not covered in this article and have not yet been documented. Intensive research is indeed needed. The Tausug people understood and used their belief on invulnerability to defend their pride in being Muslim and being Tausug. Every manner practiced in this subject forms part of the identity of the Tausug people, and something for them to be proud of.

Preservation by practicing is important. A guru shall not put this knowledge out into space, away from the Tausug society. To the Tausug, whatever the practice maybe, it shall be attributed to the Will of Allah. It is only His Qudrat that could shape and make invulnerability happen. The Tausug practiced their knowledge on invulnerability to prepare themselves for any foreign attacks. The stories of the foreign attacks affect young generations of Tausugs who inherit their forefathers’ history and destiny.

As with their invulnerability, the Tausug is powered most of all by humility and their belief that “bang aku masipa iyaampun sin Tuhan, misan unu punglu atawa mahait di’da makamatay kaku” (If I am still forgiven by Allah, whatever bullet or sharp objects cannot kill me).